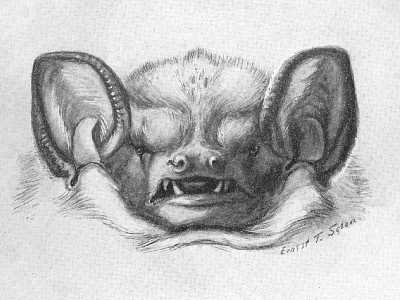 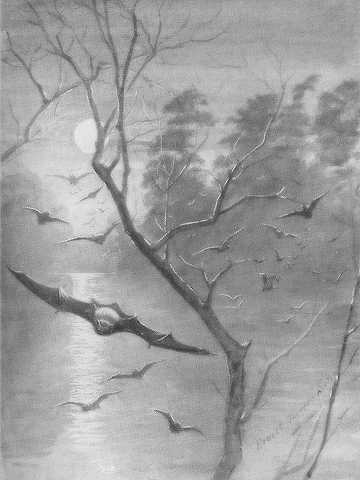 Little brown bats, Myotis lucifugus, are the bat species most often attracted to bat boxes. They inhabit most of wooded Canada and northern US. They roost in tree cavities, sheds and attics during the day and at night they forage in open spaces for flies, moths, mosquitoes and aquatic insects near and over water.

Big brown bats, Eptesicus fuscus are wide spread throughout most of North America, Central America, the Caribbean and as far south as Colombia and Venezuela. They forage for insects at night and roost in caves, tree cavities, under bridges and in bat houses. 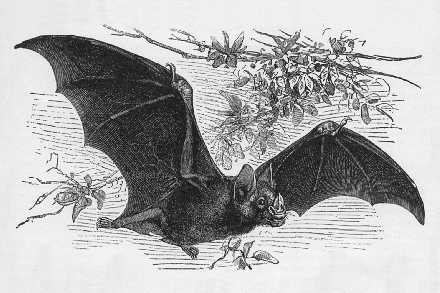 Common vampire bats range from Mexico to Central and South America and feed on the blood of cattle, horses, other livestock and wild mammals. 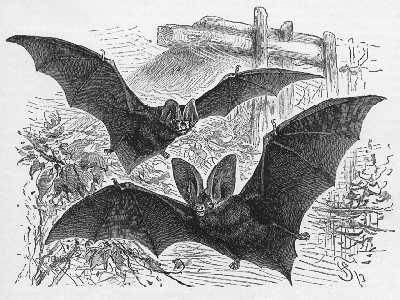 Brown long-eared bats range over much of Europe. At night they hunt for moths, beetles, flies and other flying insects catching them both in flight and on trees and their leaves.

They utilize sight and sonar and can also hear the sounds of moving insects with their large ears. They roost in tree and building crevices, attics and in bat houses. In winter they hibernate in caves, basements, other underground spaces and bat boxes. 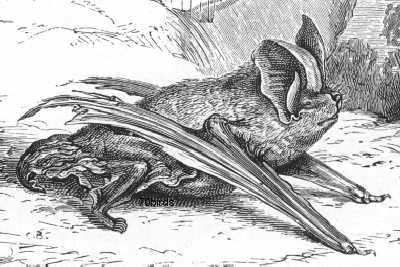 Western barbastelle bats hunt moths, flies and beetles at night and roost in tree crevices, sheds and attics during the day. In winter they hibernate in mines, basements and other underground spaces. Over time they have become increasingly rare in some of their European ranges. 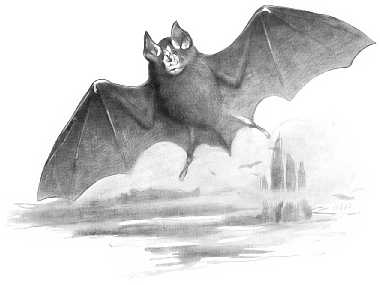 Greater horseshoe bats range in Europe, northern Africa and Asia. They eat moths and beetles often watching for them while at rest and then catching them in flight or on the ground. They roost in caves, basements, various buildings, sheds and attics and hibernate underground in winter.​ 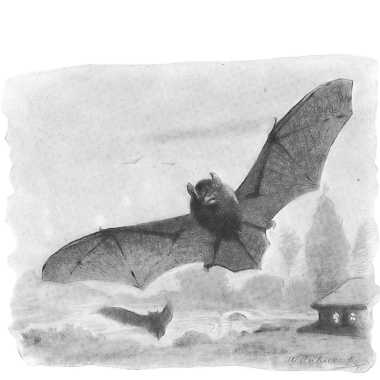 Natterer’s bats range in Europe and parts of the Near East and North Africa. They catch flies, bees and other flying insects in flight and insects and invertebrates on vegetation and on the ground. They roost in tree crevices, various buildings and bat houses and in winter they hibernate in natural caves, tunnels, basements and other underground spaces. 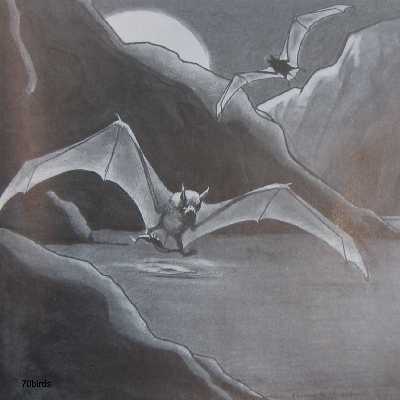 Fish-eating bats fly over water and hunt fish and crustaceans swimming near the surface, which they detect with sonar and catch by raking the surface with their large feet and sharp claws.

They range in areas around Mexico’s Baja Peninsula on the coasts of the Pacific and Gulf of California and the fresh water bodies further inland. They roost in caves and in rock crevices on cliff sides.

Another fish-eating bat species, Noctilio leporinus, hunts fish and crustaceans over the seas and fresh water lakes, ponds and rivers throughout the Caribbean, Central America and South America. 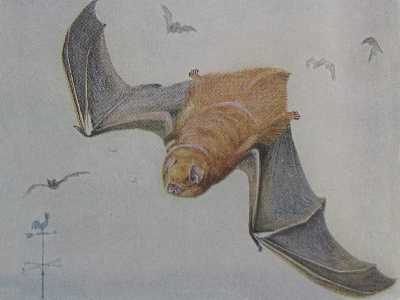 Eastern red bats range throughout North America east of the Rocky Mountains and in some of the Caribbean and Atlantic islands. They leave their roosts soon after sunset and hunt moths, beetles and other flying insects, which they usually catch in flight.

Small family groups that live in northern regions gather into larger groups at the onset of colder seasons and migrate south to warmer regions to hibernate. 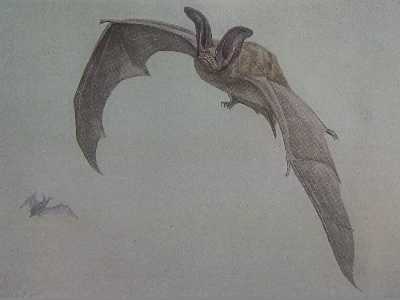 Pallid bats roost in rock crevices, buildings under bridges and in bat houses in western US and Canada, some of the Rocky Mountain States, Mexico and Cuba. Often they also inhabit second night roosts near the areas where they forage. They are ground feeders catching beetles, crickets and grasshoppers which they can hear walking and take them to their night roosts to eat. 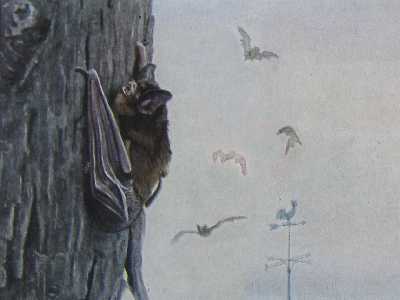 Hoary bats range throughout most of North America including some regions of the far North and parts of Central and South America. They hunt moths and other insects over water and open areas. They roost in tree crevices and caves and migrate in winter to southern US and Central America. 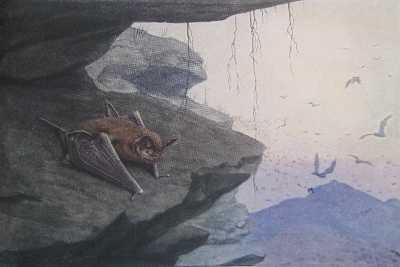 Mexican free-tailed bats are another bat species that will roost in bat houses. They naturally live in colonies numbering from a few hundred to millions of individuals usually in caves, also in abandoned mines, tree cavities, buildings and under bridges.

They hunt usually in flight for moths, beetles, flies, other insects and some ground insects. They inhabit woodlands, mountains, lowlands, and deserts in the southern U.S., south throughout most of Mexico, Central America and large regions in South America. Millions migrate every year from their northern ranges in the US to Texas. 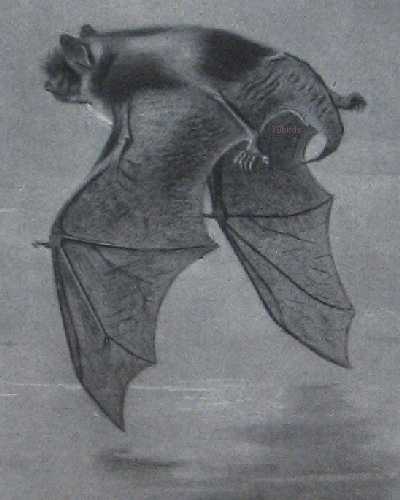 Daubenton’s bats are widespread in forests of Europe and Asia. They forage at night for midges, mayflies, moths and other flying insects over water and roost in caves, basements, other underground spaces and underneath bridges also always close to water. 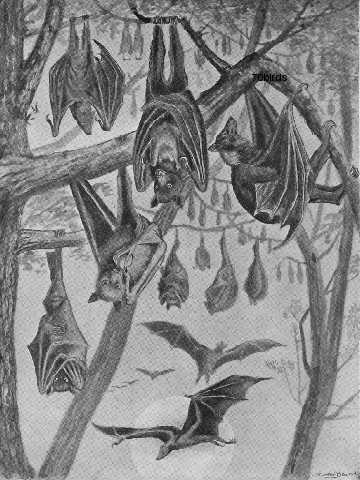 Fruit bats or flying foxes of the genus Pteropus. Some species can grow more than a foot long and weigh more than two pounds. They roost in colonies with other fruit bats high in forest trees. They appear to be inspiration for many horror movie characters. Their huge wings wrap around their bodies like giant black capes while they roost upside down. 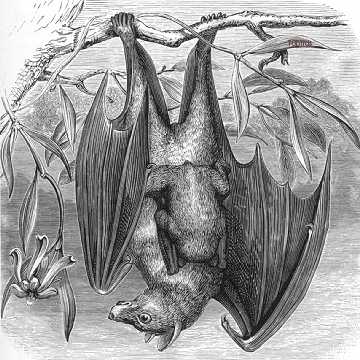 Large flying foxes (kalong, Malayan flying fox, fruit bat) are another of many large fruit eating bats that feed on fruit and nectar. They have sharp teeth for biting into various fruits and large wings which they wrap themselves with to keep warm when roosting. They do not use sonar, but have keen eyesight. 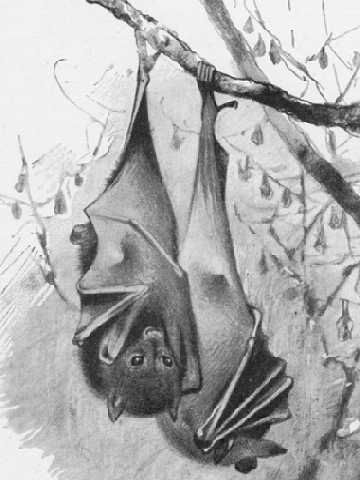 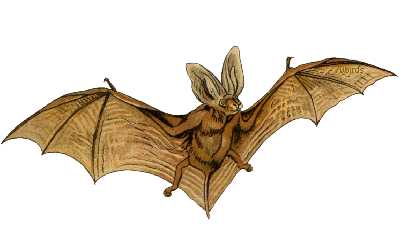 Northern long-eared bats (northern myotis) inhabit most of the eastern U.S. as far south as from Arkansas to northern Georgia and from Newfoundland to eastern British Columbia and Yukon.

They catch moths, beetles, leafhoppers, flies and other insects in flight or from tree and foliage surfaces. They roost underneath bark, in tree crevices and will also roost in bat boxes. In the fall, they migrate to caves and mines to hibernate. 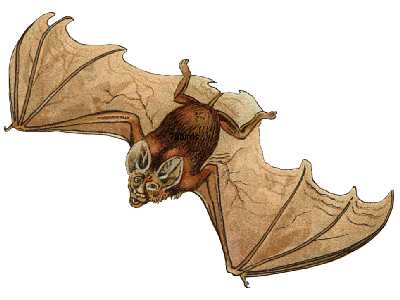 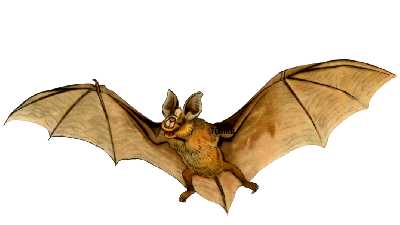 Greater horseshoe bats lived in caves until humans came along providing barns, sheds and various buildings with secluded spaces in which they now commonly roost.

“Eye of newt and toe of frog,
Wool of bat and tongue of dog”
William Shakespeare