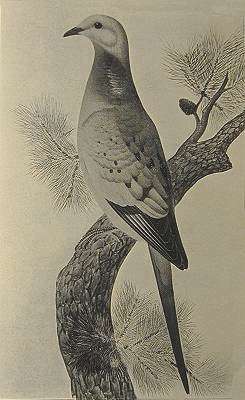 “The passenger pigeon needs no protection. Wonderfully prolific, having the vast forests of the North as its breeding grounds, traveling hundreds of miles in search of food, it is here today and elsewhere tomorrow, and no ordinary destruction can lessen them, or be missed from the myriads that are yearly produced.” Report of a select committee of the Ohio Senate in 1857 on a bill proposed to protect Passenger Pigeons. One of the most noted of extinct animals, passenger pigeons were reduced from numbers in the hundreds of millions for food. 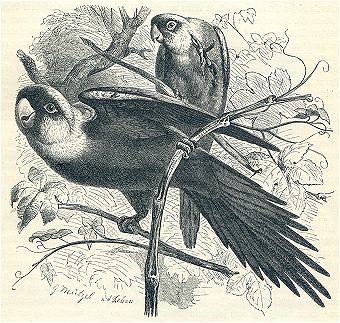 Once abundant, this extinct species nested in large colonies in the cypress swamps in the South Atlantic and Gulf States. They migrated up the Mississippi, and Missouri Rivers to the Platte and regularly to Ohio, Indiana, Illinois, Iowa, Wisconsin and Nebraska, and in the east to Pennsylvania. Hunted for their feathers and slaughtered as pests, the last reported sighting in the wild was a small flock in Florida in 1920. 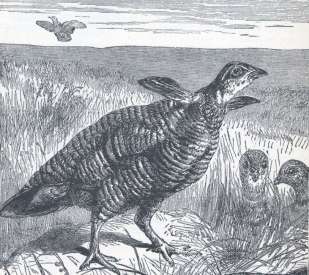 The Heath Hen was established as distinct from its relative, the Prairie Chicken in 1885. Correllus State Forest on Martha’s Vineyard was created in 1908 as a Heath Hen Reserve to prevent the bird’s extinction. The last Heath Hen was sighted in 1932 shortly after a grassland fire. 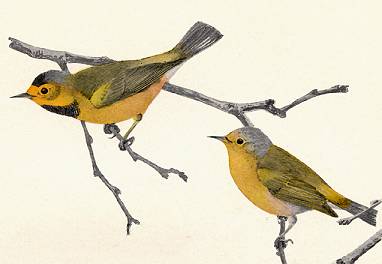 A recently extinct species, Bachman’s Warblers nested in the underbrush of forested swamps in the region bounded by Louisiana up to Kentucky and Maryland, and over to the Carolinas and Georgia, migrating to Cuba in winters. None have been seen since the early 1960s in North America and they were listed as endangered in 1967. 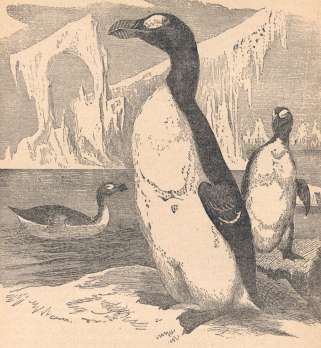 The Great Auk or Garefowl was also known as a “Penguin”. The Great Auk inhabited the coasts and islands of the North Atlantic from Virginia and Ireland to Greenland and Iceland almost to the Arctic Circle. The flightless bird was easily captured. They and their eggs fed many sailors. Shorebirds that breed in a limited number of colonies at only certain locations are highly susceptible to concentrated stresses and the Great Auk was extinct by mid Nineteenth Century. 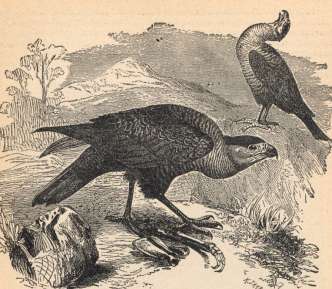 As with many recently extinct animals, this species was brought to extinction when collectors, including museums, sought rare specimens after hunters reduced their numbers on the island of Guadalupe, their only home. 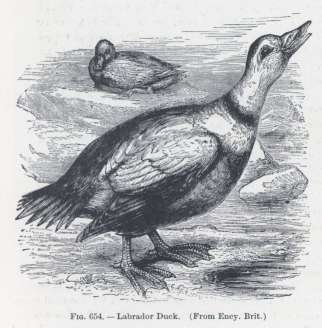 Egg gatherers raiding the Labrador Duck’s nest colonies on the coasts of Quebec and Labrador probably diminished their numbers to a point where the species could not overcome additional stresses and they became extinct by the late 1870s. 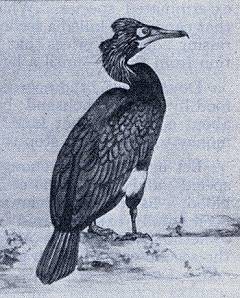 Discovered in the Aleutian Islands by George Steller while exploring with Vitus Bering in 1741. The Spectacled Cormorant was extinct within about a century. 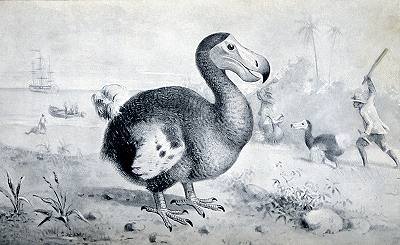 In 1505, Portuguese explorers discovered the island of Mauritius and the 50 lb flightless Dodos which supplemented their food stores. Imported pigs, monkeys and rats fed on the Dodo Bird’s eggs in their ground nests. The last Dodo was killed in 1681. 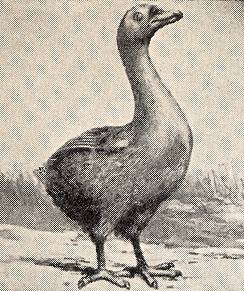 The Rodrigues Solitaire (Pezophaps solitaria) was a relative of the also extinct Dodo and flightless member of the pigeon order that lived on the island of Mauritius. The Solitaire became extinct in the eighteenth century and its remains were discovered later. 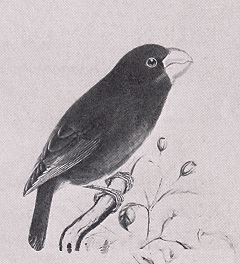 Extinct before the 20th century. According to ornithologist Scott Barchard Wilson, The Kona grosbeak “… is a dull, sluggish, solitary bird and very silent-its whole existence may be summed up in the words “to eat.” (wiwipedia) 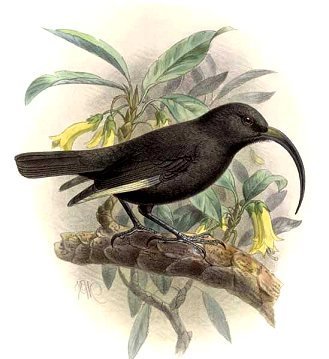 Many Hawaiian birds have become extinct in little more than 200 years. The Black Mamo was a curious bird that would approach people making it all the more vulnerable. 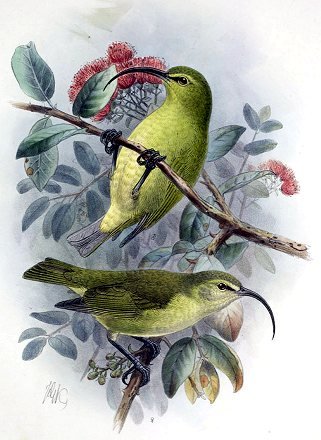 The Lesser Akialoa is named for its long, curved bill. It had a loud call and foraged for insects in bark and moss. 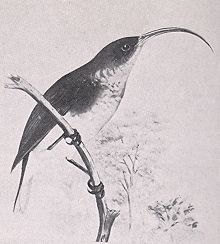 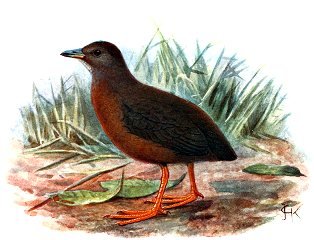 A flightless bird that lived in shrublands and open fields. Extinction was likely caused by introduced rats and cats. 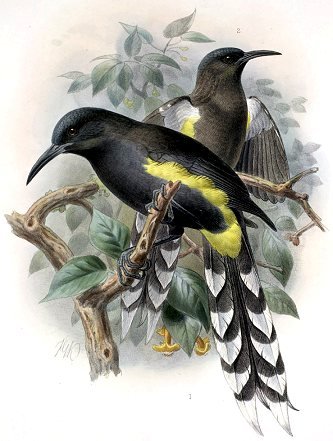 Oahu O’o’s plumage was worn by Hawaiian nobility, but extinction was likely caused by introduced avian disease through mosquitoes and deforestation. 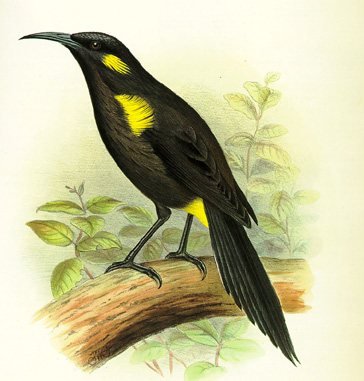 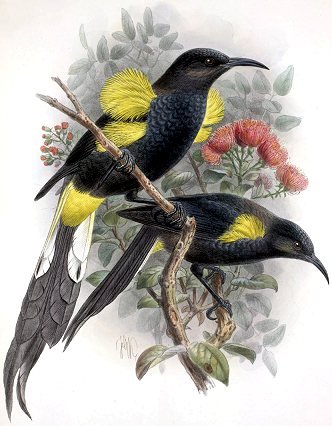 Native Hawaiians hunted the Hawaii O’o and settlers also learned to hunt them for their striking glossy black and yellow plumage. 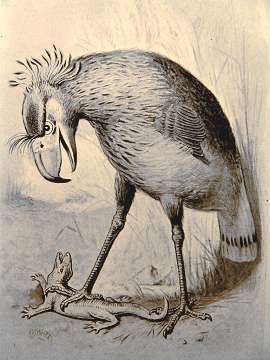 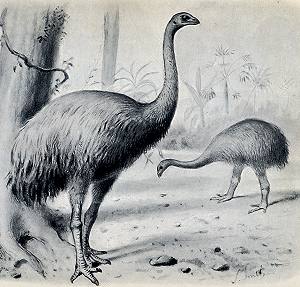