Predators of the Seas and Swamps 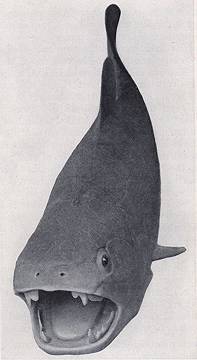 Dunkleosteus, a voracious carnivorous fish, lived about 400 million years ago. It measured up to 11.5 ft long and had huge jaws with scissor-like cutting serrated, razor-sharp bones instead of teeth. Its skull was was over 2 feet long. They were not sharks. They ate sharks. 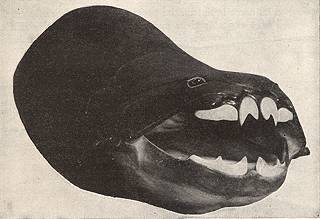 Dinichthys lived about 400 million years ago. It was about 30 feet long and weighed over 2 tons. It probably was not agile and waited in the plants of the sea floor to ambush its prey. 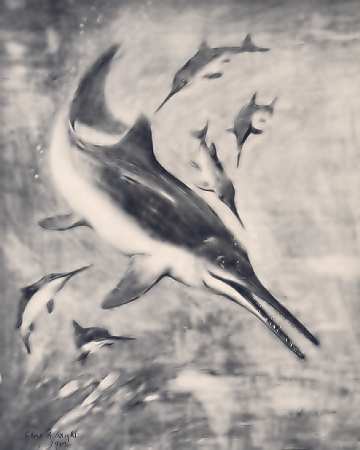 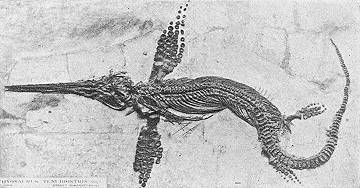 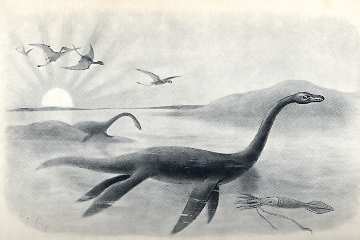 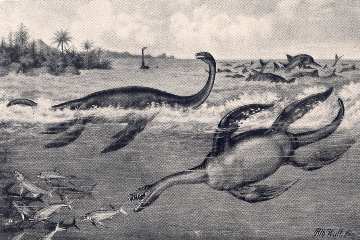 Plesiosaurus were marine reptiles with long necks, wide bodies, four paddle like limbs and small heads with powerful jaws and sharp teeth. They preyed upon fish and other marine animals. 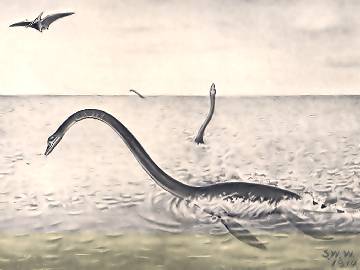 It is unlikely that Plesiosaurus could have floated in water and held their necks as high and extended as depicted in some early illustrations. Although they may have hunted in the shallows and supported themselves with their paddle like limbs on the bottom. 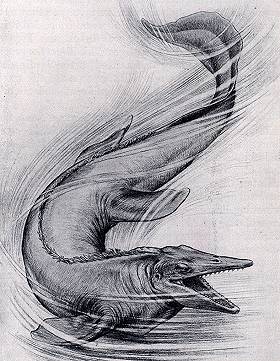 The Tylosaurus was a large marine lizard, 20 to 45 feet long, which lived during the Cretaceous about 88 to 78 million years ago. It had lots of teeth and ate other marine creatures. Fossils have been found in North America and New Zealand. 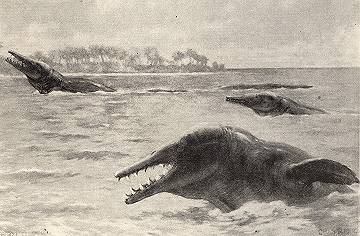 The Zeuglodon, or Basilosaurus, “King of the Reptiles”, lived during the Eocene about 40 to 50 million years ago. It was an early, 44 toothed, 55 to 75 foot long whale species with small hind legs. Zeuglodon remains have been found in North America and Africa and it’s Alabama’s State Fossil.

The Zeuglodon has been extinct for about 37 million years. Although you might want to keep your eyes open when swimming. Some believe the large serpent sightings of Loch Ness Monster in Scotland, Lake Okanagan in Canada and other lakes around the world may be descendants of the Zeuglocon or a related species. 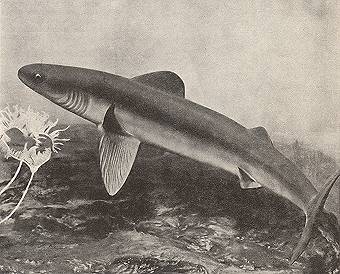 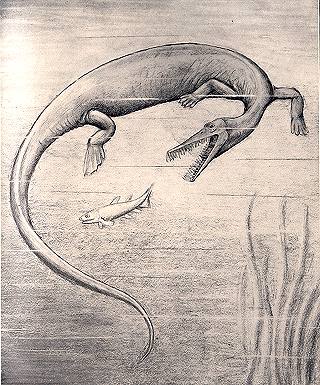 Mesosaurus, an extinct reptile from the Permian Period was one of the first marine reptiles and inhabited fresh waters of Africa and South America supporting the theory of continental drift. 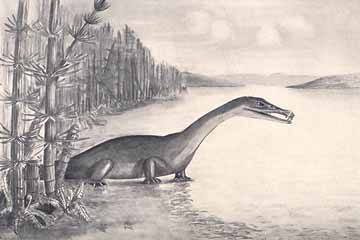 There were several Nothosaurus species, aquatic reptiles with that would have preyed on fish and other animals of the seas of northern Africa, Europe and Asia during the Triassic period. 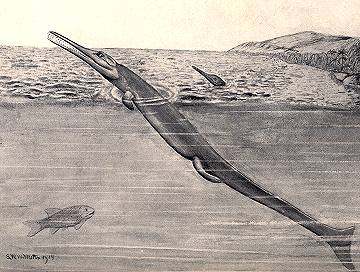 Geosaurus, “Earth lizard”, is an extinct marine crocodile that lived in the ocean during the late Jurassic to the early Cretaceous. Geosaurus had curved teeth for slashing captured prey. 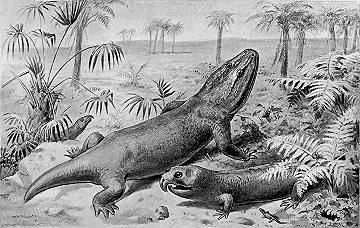 Mastodonsaurus (“breast tooth lizard”) was a large-headed amphibian of the Triassic. It was a giant among the Stegocephalians and the largest animal 200 million years ago. It looked like a huge frog, with a triangular head that was about 4 feet long and with total body length about 15 feet long. Mastodonsaurus inhabited swampy pools and lived mainly on fish.

Hyperodapedon was a beaked reptile from the late Triassic. Fossils have been found in several continents, due to the continents being joined together during the Triassic.

Tulerpeton lived mainly in shallow marine water in Devonian times and is one of the first true tetrapods to have arisen. Tetrapods are vertebrate animals having four limbs. Amphibians, Sauropsids and mammals are Tetrapods. 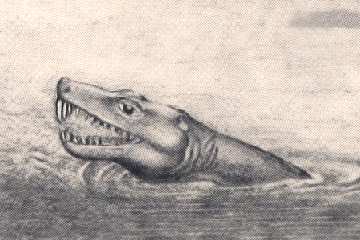 Limnoscelis was a carnivorous amphibian that lived in North America during during the Permian. 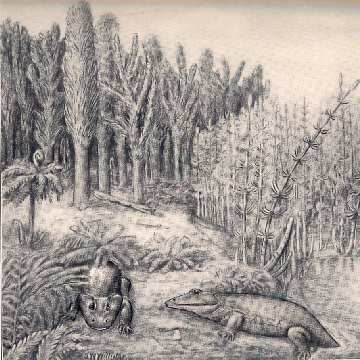 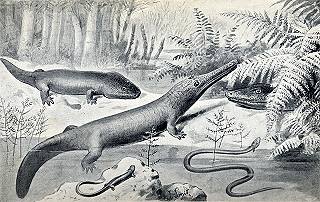 Actinodon was an amphibious carnivore which lived during the Permian.

Remains of Ceraterpeton of the Permian are found only in the “Coal Forests” of Buxieres les Mines in France.

Dilichosoma, renamed Phlegethontia, were legless, burrowing, one meter long, snake-like amphibians of the Carboniferous and Permian periods in Europe and North America.

Loxomma is an extinct genus of large crocodile-like reptiles named Loxommatidae. They were large aquatic predators of the Carboniferous period. Their long rows of needle-like teeth show that they were fish-eaters. 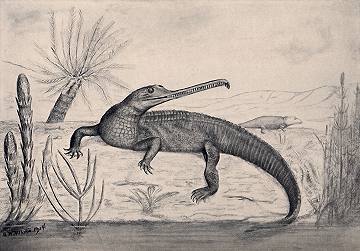 Mystriosuchus is an extinct genus of phytosaur (similar to modern day crocodiles) that lived during the Late Triassic in Europe. It grew to about 13 feet long and weighed up to 1,000 lbs. Morphological examinations indicate Mystriosuchus was adapted to aquatic life and had a fish diet, some species being freshwater while others were marine.